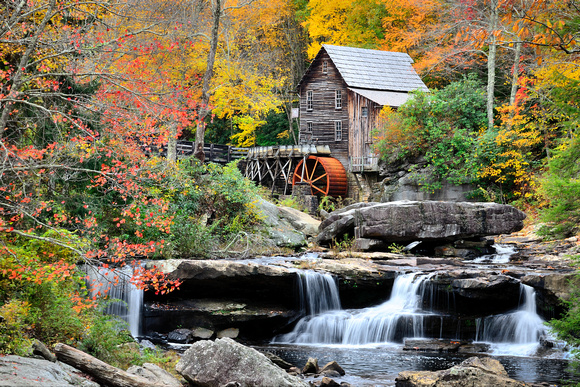 The Glade Creek Grist Mill is a fully operable grain mill that was completed in 1976. This mill was built as a re-creation of one which once existed on Glade Creek long before the site became a state park. Known as Cooper’s Mill, it stood on the present location of the park’s administration building parking lot.

Of special interest, the mill was created by combining parts and pieces from three mills which once dotted the state. The basic structure of the mill came from the Stoney Creek Grist Mill which dates back to 1890. It was dismantled and moved piece by piece to Babcock State Park from a spot near Campbelltown, West Virginia. After an accidental fire destroyed the Spring Run Grist Mill near Petersburg, West Virginia, only the overshot water wheel could be salvaged. Other parts for the mill came from the Onego Grist Mill near Seneca Rocks, West Virginia.
© Kevin Childress Photography
User Agreement
Cancel
Continue