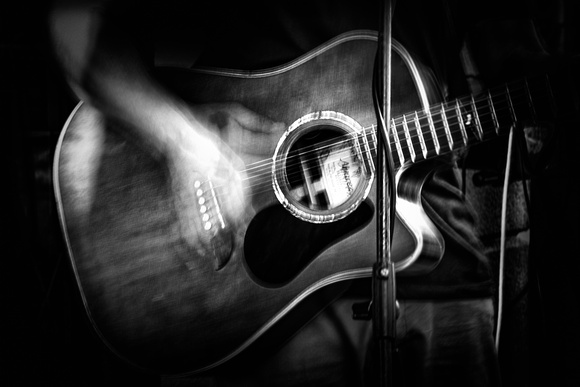 Over the last decade I have typically avoiding restaurants and pubs that have a guy standing in the corner with a guitar wailing the same old cover songs over, and over, and over, and over again. I mean, enough already! But in October, 2016 my wife and I visited a place in Santa Rosa Beach, FL and had a nice discussion with the proprietor who said we were about to see one of the best singer/song writers that has ever lived. Uh-huh, right.

Sure enough, 15-minutes later, the guy was set up right next to our table and began his set. It only took me a few minutes to realize there was indeed something special about this guy. First and foremost, his music was original and was very well executed. Second he had fantastic showmanship and it was obvious he loved his work. His technique involved recording several simple harmony tracks into loops, including percussion on the top and back of the guitar body, that when played back at once sounded like two or three guys with guitars and a someone with a soft bongo. While that isn't an original concept necessarily, his delivery was fantastic and it was really neat to watch him begin and end the individual loops with an array of pedals as he played the 'primary track' over the recorded loops. Finally it was obvious that it really made him happy to see the audience appreciate the show and was happy to let me snap off as many pics as I wanted. Overall I would say this was a top-5 experience for me watching an acoustic guitar player do his thing!
© Kevin Childress Photography
User Agreement
Cancel
Continue